Apple’s IPhone was first revealed in January 2007 and available for consumers in June the same year in the United States, then progressively launched globally in 2008. Out of curiosity I pondered through Nokia’s quarterly presentation slides in the years 2007-2010 in order to get a better idea about how they related to the ongoing shift from feature phones to smartphones. While such a brief and shallow review will not give the full picture of Nokia’s response, it might still reveal something.

Going through these slides it is striking to what extent Nokia emphasizes the strength of its ever larger product portfolio. In the years 2007-2008, virtually every slidestack contains at least two full slides crammed with all new product launches. The images below come from some of these presentations. 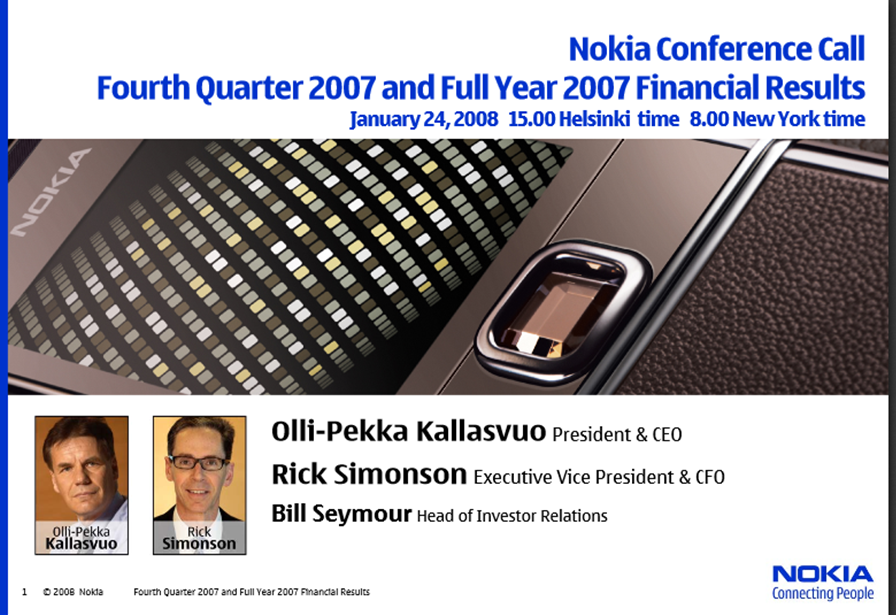 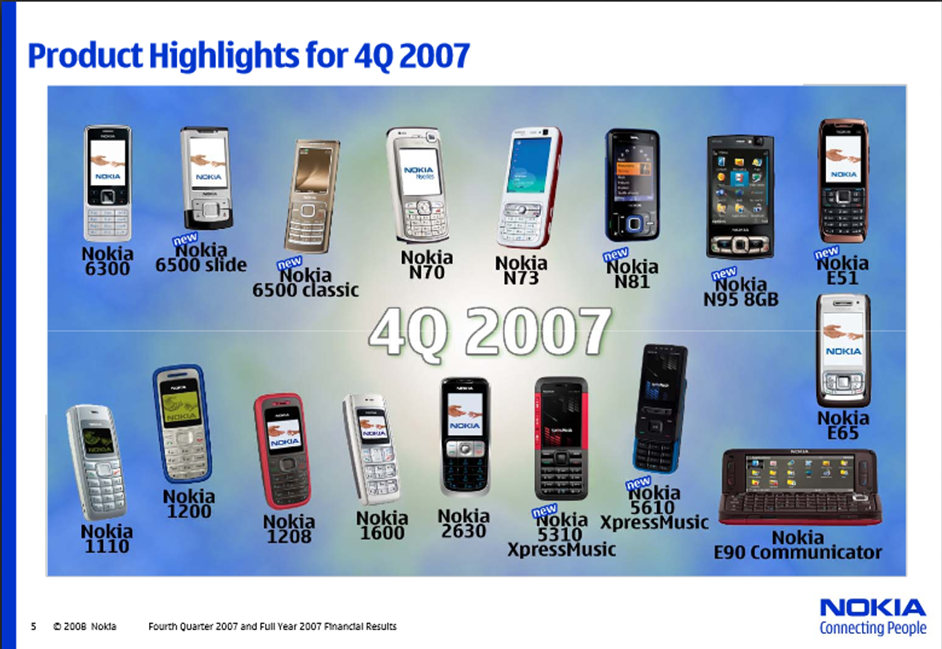 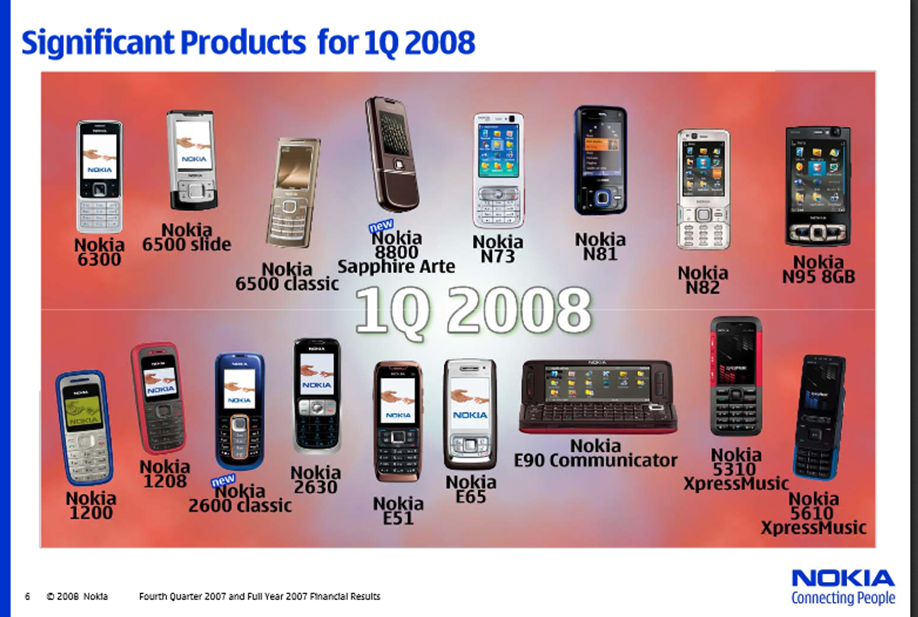 It is also noteworthy how little is said in these years concerning technological change and the emergence of smartphones. Most of the information is related to market growth, Nokia’s market share, gross margins etc. Towards the end of each presentation, a 2*2 matrix with threats and opportunities is presented. With no exceptions, this slide is very unspecific and the term ‘Competitive factors in general’ is frequently used.

Here, there seems to be a symbiotic and destructive relationship between established firms and the stock market. Financial analysts care about the big numbers (revenues, market growth, market share), these notions fit neatly into their spreadsheets and number crunching exercises. Technological change cannot be easily quantified, nor fully assessed in terms of its organizational impact. Top management therefore happily focuses on the aforementioned issues and this inevitably makes them pay less attention to changes of a more discontinuous nature. Associate Professor Mary Benner at Minnesota University has shown that stock market analysts virtually ignored Kodak’s and Polaroid’s digital efforts in the 1990s, while they paid a lot of attention to (and praised) their product launches based on photochemical film (read more here).

Also, a slight sense of (Finnish) optimism is communicated. In the Q1 report from 2008, the following statement is made:

“Nokia continues to expect industry mobile device volumes in 2008 to grow approximately 10% from the approximately 1.14 billion units Nokia estimates for 2007.” (the presentation can be found here).

In Q2 2008 the following is written about the future:

Being present in a growing market can be highly deceptive because growing demand might obscure the fact that a technology is about to become obsolete, thus sending a false message to incumbent firms that things are actually going well. This was indeed the case with film sales for Kodak in the late 1990s and for analog CCTV companies in the 2000s. The market kept growing and an increasing demand concealed the fact that the technology was going to die, thus reducing the incumbent firm’s sense of urgency.

In 2008, slides are still filled with launches of new feature phones. However, there is an increased focus on software services and specific phones: 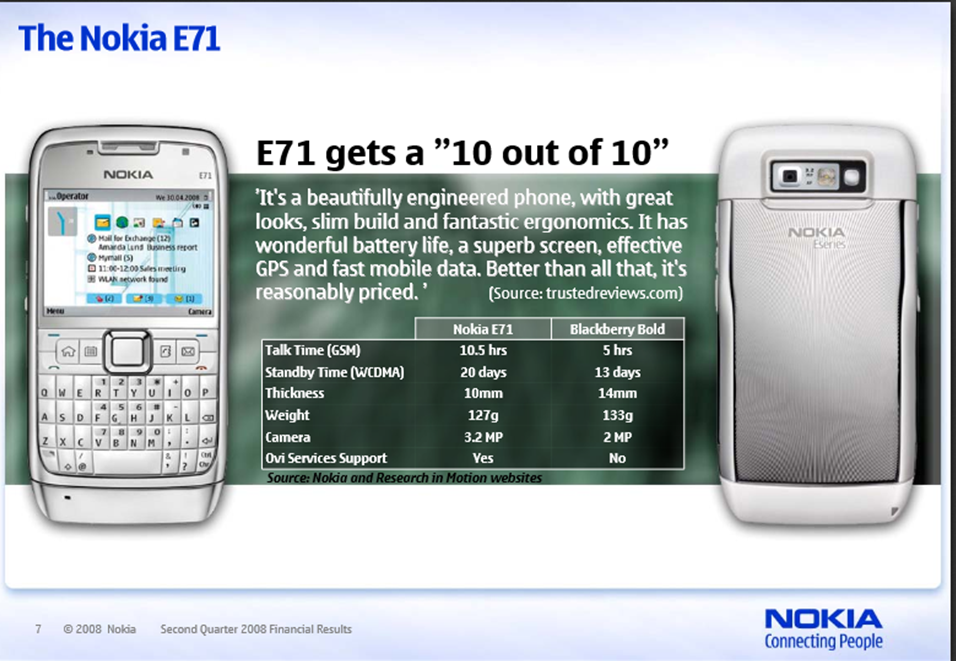 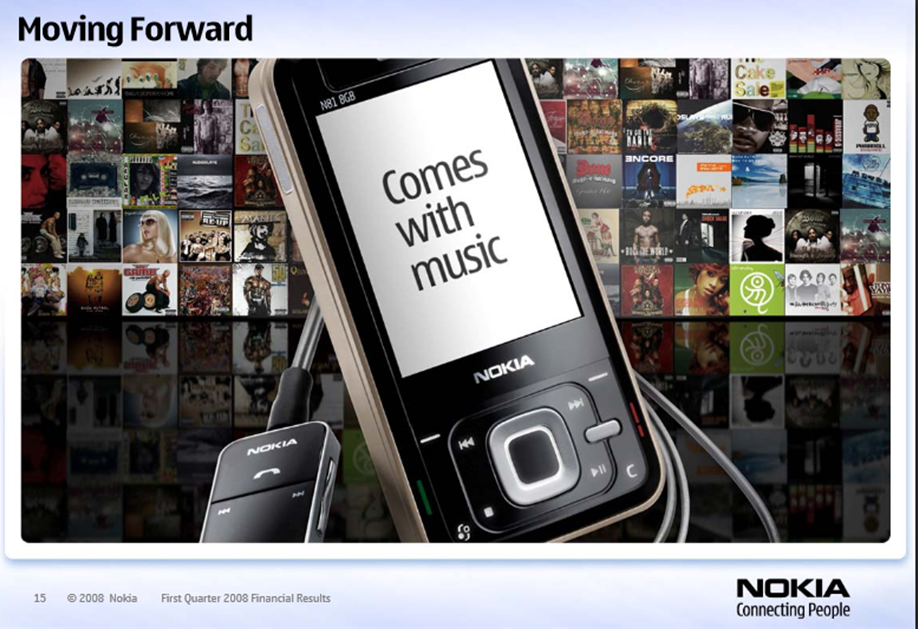 At this point it seems that the company is recognizing that software is becoming more important and that phones are used for a wide range of different purposes. But the response is to do more of the same, i.e. launch more feature phones with different functionalities and hanging on to the by now outdated operating system Symbian.

By late 2008, special attention is of course given to the financial crisis. Still no statements about the shift to smartphones, except for this amazing piece of denial (Q4 2008):

In Q1 2009, the company announced that it will launch Ovi Store and that its music services have been launched in Australia and Singapore. Still no sense of urgency communicated.

Bearing all the above in mind and especially the quote from Q4 2008, the slide below from Q2 2009 comes as quite a surprise: 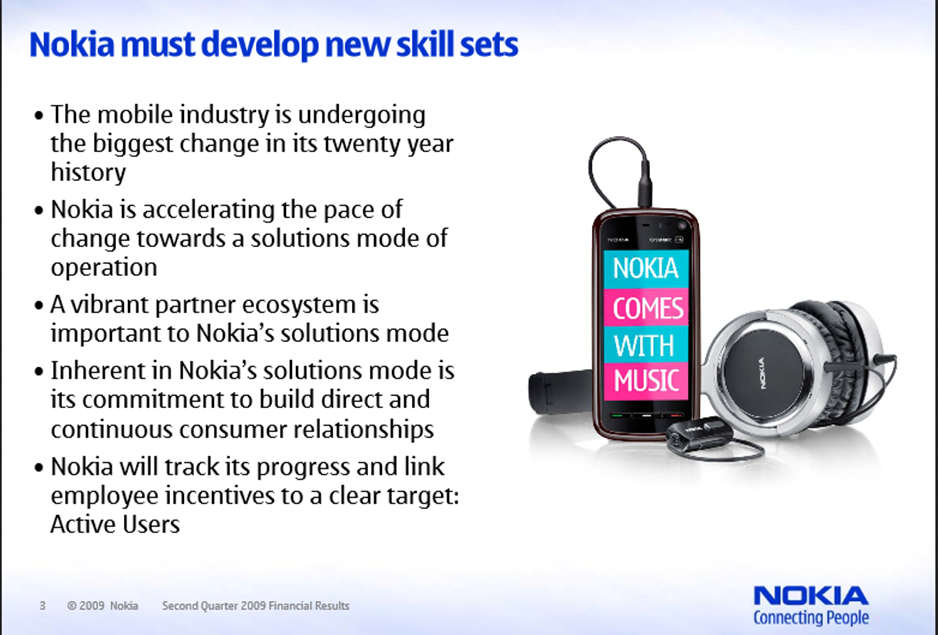 All of a sudden, it is stated that the industry is undergoing some major change, something that has not been communicated at all previously (at least not on the slides). In this presentation, even more attention is given to software and Ovi Store. For the first time, Nokia now also stated that it will try to “adjust our services businesses and open up for greater opportunities for third party partner services”. Thus, about two years after the launch of the IPhone and the shift towards an open model with application developers, the company finally announces that it is going to do something at all. In a digital world, two years is a very long time.

In Q4 2009, devices (mobile phones) and services (software) are no longer reported separately but rather on one slide where numbers and events are more aggregated: 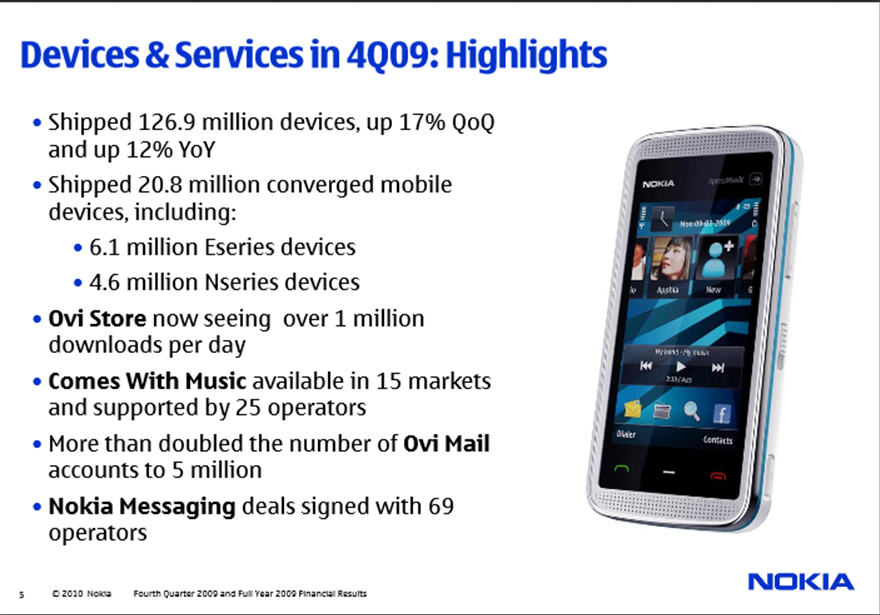 As businesses, they still remained unintegrated mainly since Nokia still refused to do anything about its underperforming operating system.

The following quote can also be found in the slides from Q4 2009:

While the word ‘momentum’ communicates something else than actual results, this is still a choice of words that clearly doesn’t mirror the seriousness of the situation – especially bearing in mind the results that were delivered in the coming years. This is also the first time the word smartphone is used at all: 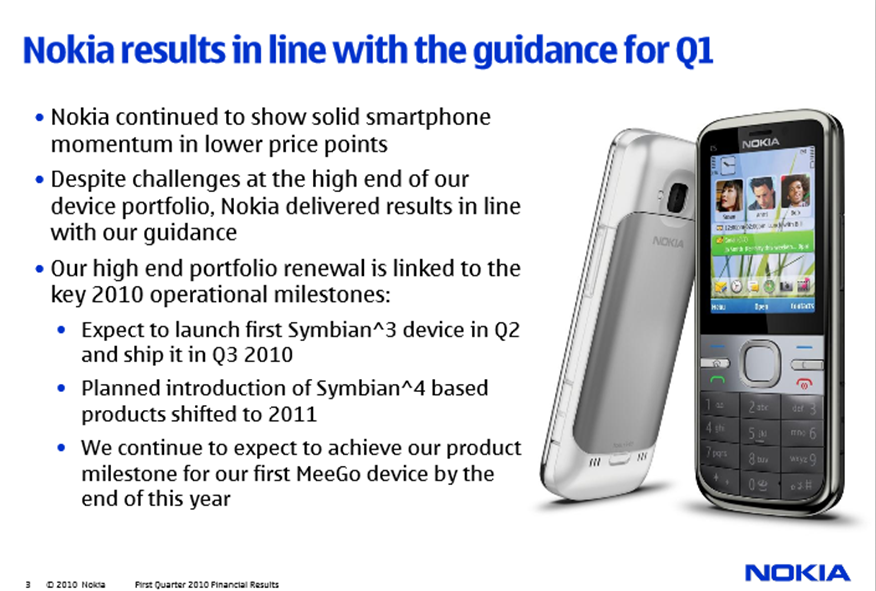 In Q2 2010, Nokia is for the first time communicating that it is doing something about its old software. Words such as “increased speed” and “innovation” are used below, but the fact of the matter is that the company is still doing more of the same, they’re still trying to compete with cars by developing a faster horse. 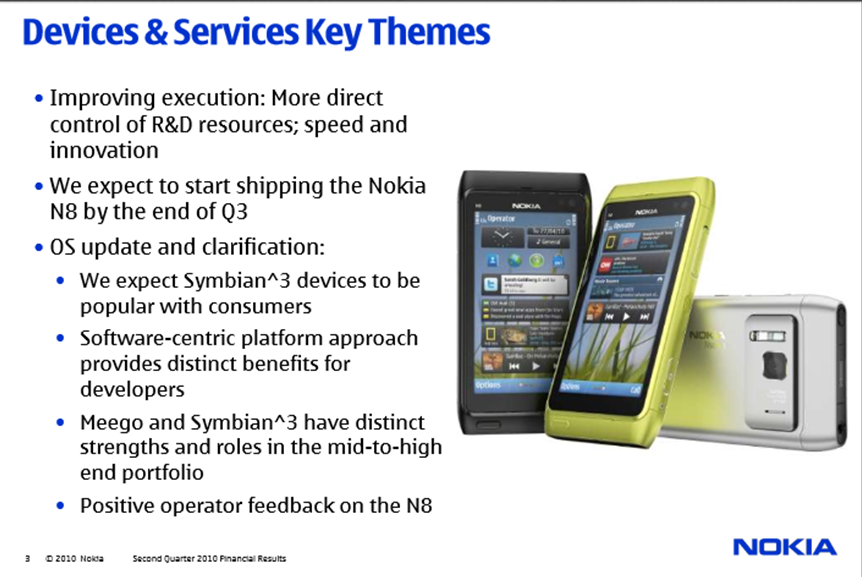 By Q3 2010, the big slides featuring Nokia’s huge (and obsolete) product portfolio are gone. Sales declined 20 percent in Q2 2011 and went down 25 percent in Q3 the same year. In late 2010 and 2011, the presentations become so meager and dry that it hardly made sense to look at them.

Having researched similar cases in other industries and given speeches about how established firms respond to technological change, I usually argue that these firms often recognize the threat but that their responses are not the right ones. Firms do after all not act in isolation, they attend fairs where new products are exhibited and usually pay attention to what competitors are doing. I therefore frequently and rather easily make a point in busting the “oversleeping myth”.

Having reviewed the material above, one hardly gets the impression that this was the case with Nokia. The company clearly overslept and top management did not realize the urgency of the situation – the slides do not communicate any major issues until suddenly it is stated in Q2 2009 that the mobile industry is undergoing rapid technological change. This statement was made two quarters after the legendary quote “Nokia’s longer term strategy remains valid and intact”. And once the problems were recognized, the response was for many years the faster horse strategy – better feature phones and eventually an upgrade of Symbian, an operating system that was never designed to be used on smartphones.

One can only marvel at the amount of people who have lost their jobs and how much shareholder value has been destroyed by the complacency of Nokia’s top management in these years.

All the above material can be found at Nokia’s Investor Relations website (here).